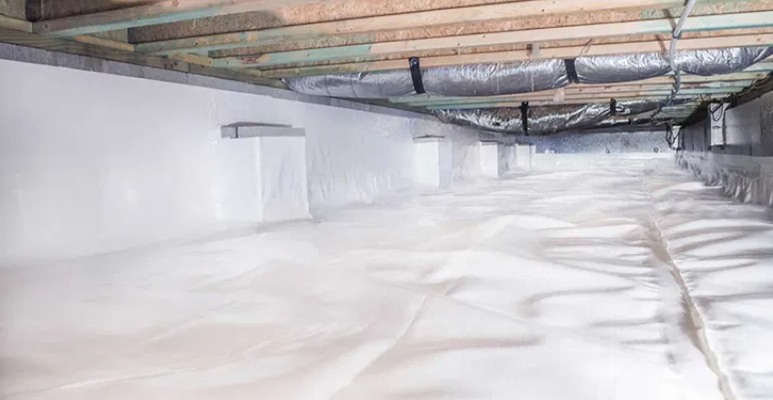 In recent years, many homeowners have decided to invest into their home’s crawlspace. Research shows the condition of a home’s crawlspace has a significant impact on the interior areas of the home. Richmond Irrigation has been to many properties that have a spotless crawlspace (see picture). As this trend continues to gain in popularity, it is our goal to ensure the value your irrigation system brings to your lawn/landscape does no harm to the home itself.

Richmond Irrigation has begun the process of training our technicians to recommend relocating certain crawlspace components, when they come due for repair, as opposed to simply repairing ‘in place’. As we implement these new guidelines, we will focus on what we deem to be the most significant examples of unnecessary crawlspace components. Examples of these would be electric valves and PVB backflow prevention devices. Unless your home is truly an exception, repairing these items ‘in place’ (opposed to relocating them to a safer location) would be a disservice to your property. We are fully aware that other irrigation companies will likely disagree with our position (that’s what makes us the gold standard in RVA!)—if the pictures aren’t convincing enough, we encourage you to get the opinion of a fire/water restoration professional, or a crawlspace company.

If you are the type of person that likes to be proactive, we would be happy to provide you with a quote to relocate your system’s components to a safer (exterior) location. Just give us a call and we will have an expert out to perform an estimate. We typically find projects of this scope range from $500 and up, with an average being around $2,500 for the typical single family home found in RVA. Keep in mind, if your crawlspace floods (as shown in this picture) damages will easily exceed the costs of relocating! 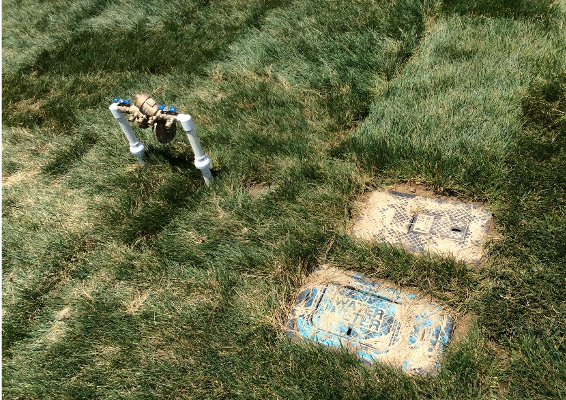 Obtaining a companion meter and getting it connected to your irrigation system can be somewhat of a challenge, as there are multiple steps. We prefer to handle the entire process for our customers, but if you are interested in knowing what all is involved read on.

We are often asked “How long will it take to recover my initial investment?” This will obviously vary depending on the cost associated with installing the meter, along with the size of your property. A good rule of thumb is if you are planning on owning the home for the next four years – you will likely come out even or ahead during that time. 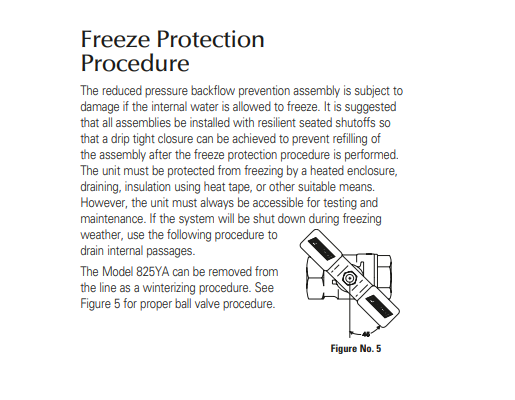 The backflow prevention device is the most important (and most expensive) component of a home’s irrigation system.

In order to follow the manufacturer recommendations for winterization, the ball valves and test ports of a backflow prevention device will be turned to the 45° position (half open position) and remain as such until spring startup.

Most backflow prevention devices for irrigation systems in Richmond are installed on pvc piping with unions. The unions allow the backflow prevention device to be easily removed (without cutting pipe) for service. These unions are typically left in a ‘loose’ position over the winter months. Prior to turning the water back on for the spring startup, the o-rings of the unions need to be inspected and replaced if needed. Once verifying the o-rings are properly installed, the unions must be hand-tightened.

The pictures below show how a union allows the backflow prevention device to be easily removed from the pvc piping by simply unthreading it. You can also see the o-ring of the union that must be checked and replaced (if needed).

If requested, Richmond Irrigation will remove your backflow prevention device so you can safely store it in a heated environment over the winter months. However, we do not recommend this as it is not necessary to prevent freeze damage and it also allows for dirt/debris to possibly enter your system. 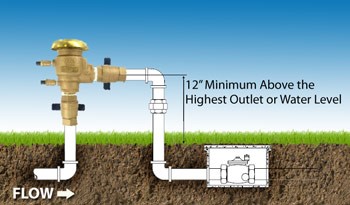 What Type of Backflow Prevention Device Do I Have?

Backflow prevention devices are the most important (and most expensive) component of an irrigation system. These devices protect the drinking water by preventing possible contaminants that can commonly be found in a lawn (pesticides, pet waste, etc.) from entering your home’s water supply.

There are two types of backflow prevention devices approved for use on irrigation systems in Virginia – the PVB (pressure vacuum breaker) and the RPZ (reduced pressure zone). Both devices are effective in keeping your home’s water supply safe from possible contaminants provided they are installed properly and routinely tested (annually).

Both devices are installed above ground and are usually located near the irrigation system’s main shut-off valve, as the device needs to be upstream of all irrigation components. Because the device is located above ground and can be an eyesore, we try to install it in a location that minimizes its visibility. A great location to install a backflow prevention device is a plant bed or along the side of a home’s foundation with other equipment, such as the A/C units.

What is a PVB? (Pressure Vacuum Breaker, or PVB)

The PVB backflow prevention device only provides protection against back-siphonage, not backpressure. Therefore, it must be installed at an elevation 12” higher than the highest outlet. The outlets of an irrigation system would be the sprinkler heads. For example, if your property has significant elevation changes, you will need the PVB to be located on the highest elevation of your property – otherwise it is likely that sprinkler heads would be installed at a higher elevation. This device has two ball valves (typically with blue handles) installed in a ‘L pattern.’ The PVB has two test ports. The test ports are a small ball valve operated by a flat head screwdriver. The purpose of the ports is to allow a testing instrument to be connected to the device for its annual test.  The PVB will have a name plate that contains a serial number used to complete the backflow test report form.

What is an RPZ? (Reduced Pressure Zone, or RPZ)

Do I Have a PVB or RPZ Backflow Prevention Device?

In summary, both devices perform the same task of protecting the water supply from possible contaminants. For the PVB to perform this task it must be installed higher than the highest sprinkler whereas an RPZ can accomplish this task regardless of the elevation it is located. Both the RPZ and the PVB are required to be tested annually to verify the internal components are functioning as designed. Both devices are installed on above ground piping (typically pvc) and the device itself is constructed from brass. The best way to distinguish between the two devices is to count the number of test ports. A PVB backflow prevention device has two test ports whereas an RPZ backflow prevention device has four. The picture shown to the left depicts a testing instrument connected to two of the four test ports of an RPZ backflow prevention device. Both devices will have two ball valves, one on the inlet side and one on the outlet side – however the orientation of the valves is different between the two devices. The orientation of the PVB’s ball valves are in a ‘L pattern’ whereas a RPZ’s ball valves are installed ‘in-line’.

Lastly, while it is useful to understand what type of backflow prevention device you have and its role in protecting the water supply – your best bet is to use a trusted professional when working on this device.

It’s finally here, you can control your irrigation system from a phone or PC!

Much like your home’s thermostat or security system can be operated from a phone or PC – we offer a controller for your irrigation system that will provide that same level of convenience. There are several manufacturers that offer this type of system, and we have carefully reviewed each of them before ultimately deciding on Hunter Hydrawise.

In addition to the convenience that these systems provide, they can also offer water saving by automatically adjusting the watering schedule based on anticipated weather events. For example, we can setup an automatic adjustment that will decrease the watering schedule by 50% if the forecasted high for that day does not reach 75°.

Also, if you add a flow meter to this system, you can track the water usage and receive alerts in the event of a leak. The installation of a flow meter can be a little tricky on existing systems, as we typically must install wiring from the flow meter (usually installed near the backflow prevention device) all the way back to the irrigation controller. However, we expect that soon the manufacturers will offer a wireless flow meter.

Other benefits include not having to leave access to your garage or utility room in order for Richmond Irrigation to adjust your irrigation system’s controller – as the service tech will be able to remote access your system from his/her mobile device (provided you grant Richmond Irrigation permission through the app!)

One of the most common questions we are asked is “How long should I water?”

While many companies might give you a recommendation of 15 minutes per zone on Monday, Wednesday, and Friday – Richmond Irrigation likes to consider more factors when setting up a watering schedule.

The truth is the amount of water that is required varies from month to month – if you setup your controller in the spring and don’t adjust it throughout the year, you are likely overwatering during the spring and fall months and underwatering during the summer months. To properly water a lawn in the Richmond area, you should at minimum adjust the watering schedule on a monthly basis. We understand that most folks with irrigation systems don’t have time to deal with this (we also understand that most controllers are not user friendly) – so we offer an Enhanced Maintenance Agreement that includes monthly visits during the growing season to adjust the watering schedule and review the system for any issues.

Our goal when setting up a watering schedule is to replace the amount of water that is being lost – water is lost through evaporation and transpiration (evapotranspiration). The rate that water is being lost changes dramatically throughout the year – see below table for historical data.